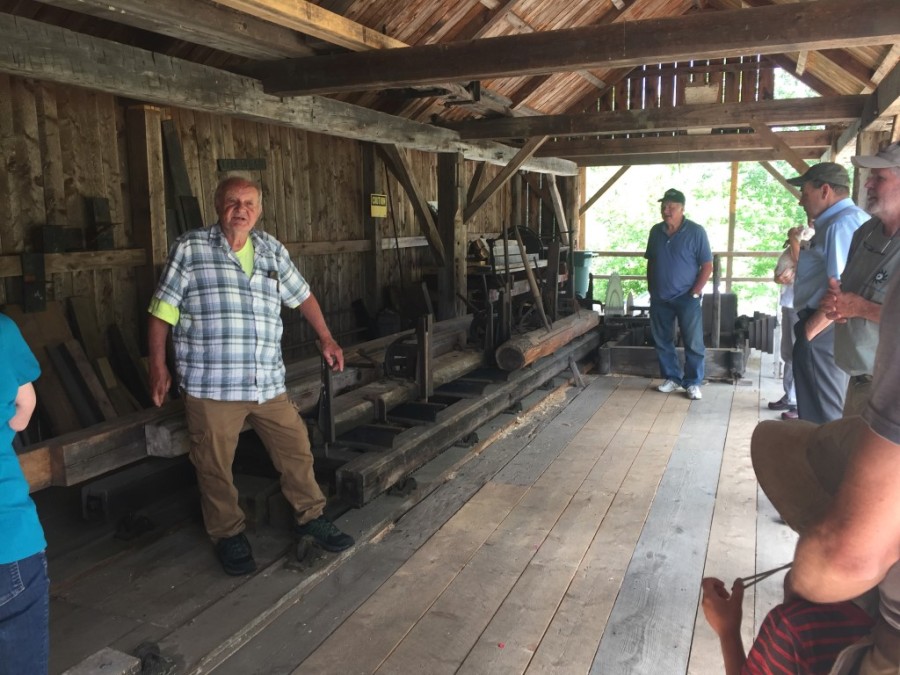 Eliot Morse stood with one hand laid casually on the carriage framework of the old sawmill that his great-great-great-great-grandfather had built in Calais more than 200 years ago.  He was talking to the group of visitors at the Robinson Sawmill’s recent annual meeting about some of the stories that had been passed down to him.  He explained to us how the water-power mill had worked and told us about some of the sawyers who had run it.  His stories helped me imagine some of the other hands that had been laid on the carriage framework in the more than 150 years the mill had operated.

When I heard about the Robinson Sawmill restoration project and was invited to the annual meeting, I knew I had to go visit.  Nineteenth-century water-powered sawmills are key features of the Vermont landscape history interpretation work I do.  Virtually every Vermont town had one in the early years of European settlement.  Sawmills fashioned the lumber for the buildings that sheltered the early settlers and their animals – their homes and barns.  Most water-powered sawmills are long gone now, abandoned when fossil fuels replaced waterpower.  When I’m leading field trips, I frequently stand with people at old sawmill sites, but I usually have to wave my hands a bit while I use nineteenth-century maps and old photos to conjure up the old mill in the mind’s eye of my group.  When the Robinson Sawmill restoration is completed, I can look forward to being able to refer people to this living history teaching resource.

In the sawmill memorabilia laid out on one of the annual meeting lunch tables, I found a clipping from the local newspaper about the mill restoration group’s work in 2007 that made me chuckle.  Journalist Mel Huff described the mill thus: the mill operator “turned a wheel to raise the gate to open the pipe that carried the water that powered the blade that sawed the logs.”  The chain reaction described made me want to explore the whole building and grounds to see if I could see all the parts and steps along the way.

I started at the carriage framework where the talk had been and worked my way backward through the process.  The carriage had a log on it, and you could see that the carriage could be mechanically ratcheted across the floor on steel tracks toward the circular saw blade. 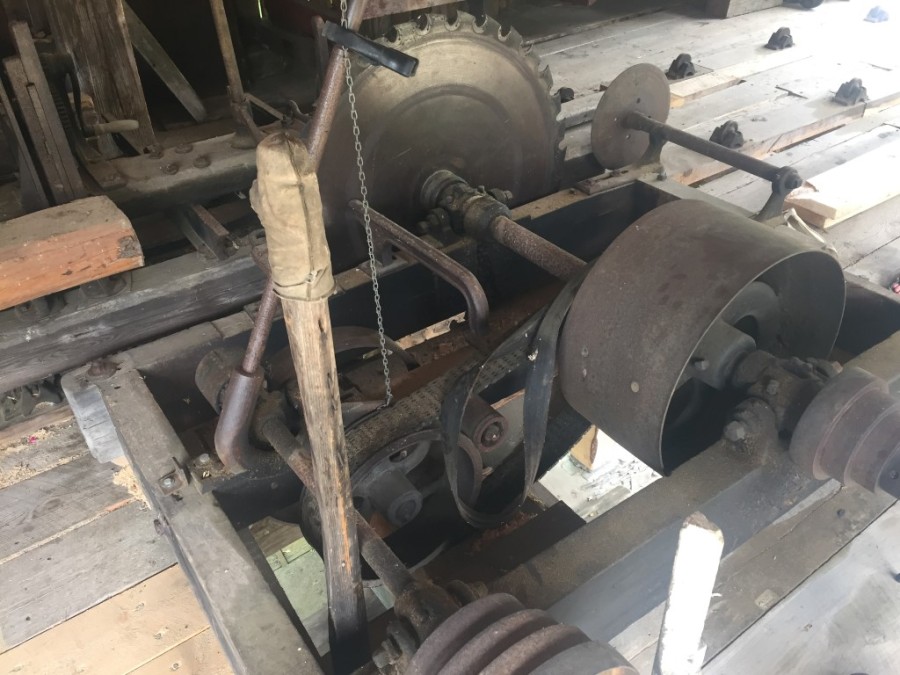 The circular saw blade, which replaced the original 1803 up-and-down saw blade in the last half of the nineteenth century, was mounted on an axle and the other end of the axle had a large metal wheel on it with a leather belt.  If I leaned over and looked down through the opening in the floor, I could see that the belt transferred energy from another wheel down there.

When I went down to the next lower level, I could see that the energy to turn the metal wheel had been transferred from a set of toothed, intermeshing bevel gears in an attached lean-to.  Leaning over again and looking down one more level, I could see the horizontal turbine and the brook water below.  This was the contact point between the liquid natural resource and the solid mechanism I had followed thus far.  Next to the turbine, I could just glimpse the end of the squared wooden pipe that delivered the water. 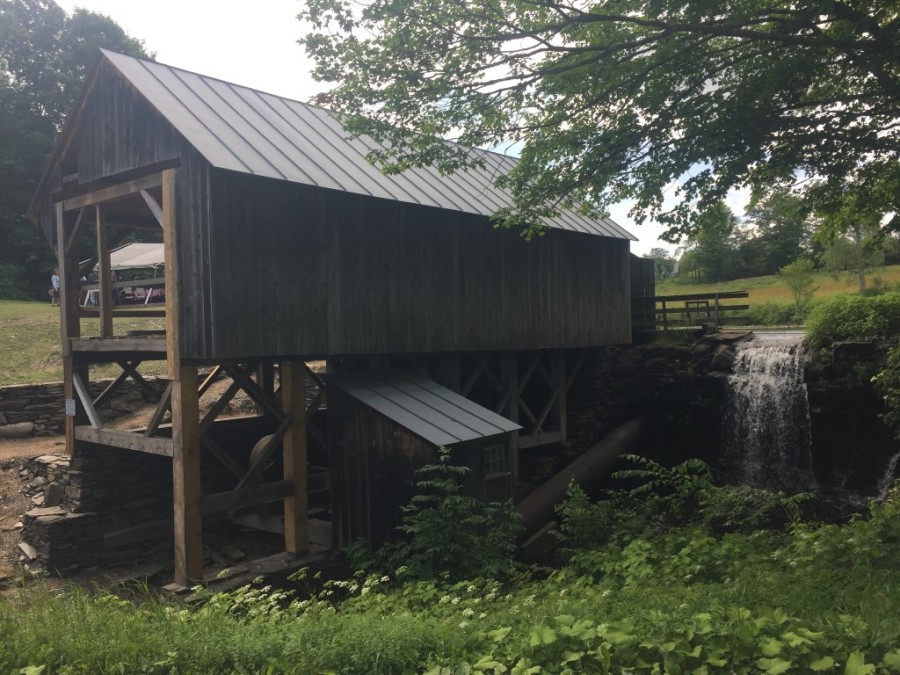 To really see more, I realized I needed to get outside the mill building, so I left the mill and got out onto the road below it to get a better view.  From there, I could trace the whole water feeding mechanism back.  The wooden pipe came out of a metal pipe, and the metal pipe came straight out of the gate on the dam. 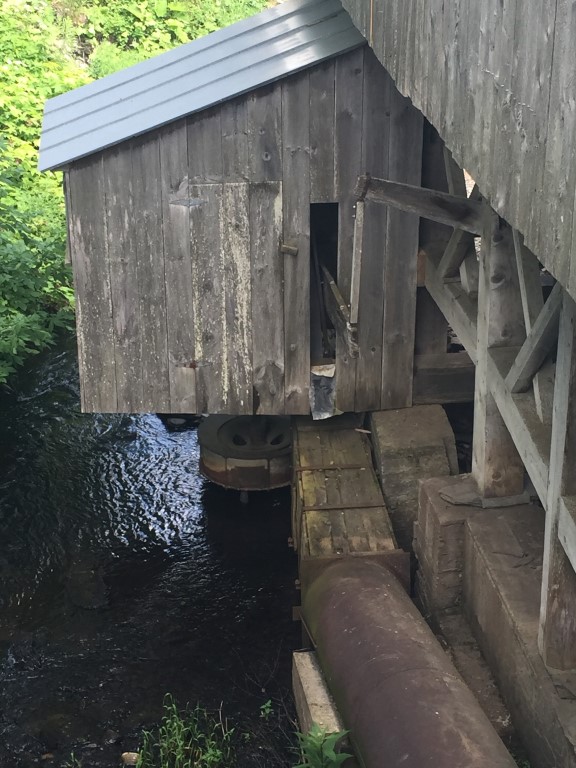 Up at the top of the dam, the gate could be opened and closed by a wheel that turned.  I had finally reached the starting point where the whole chain reaction began.

I walked up and stood at the top of the dam for a few moments looking at the ponded water, and I couldn’t help but contrast its stillness with the potential energy I now could feel it had.  I could picture that when the quiet water was let out, and with the help of gravity, all the metal and leather parts below would spin with their synchronized movements, and a newly sawn log and sawdust would come out at the end of it all.  As I looked up the hillside across the pond, I saw a beautiful old nineteenth-century wooden barn.  After my explorations around the mill, now I could not only understand in detail the sequence of steps that connected the sawmill to the built landscape we love surrounding it, but also truly understand which came first and that one required the other.

Find Me On Social Media