Yesterday, I was invited along on Williston’s Vermont Master Naturalist Program field day to look at the geology of the town.  It was a chilly day, with temperatures in the 30s, and, as I zipped my winter coat that morning, I wasn’t thinking about the evidence we would be seeing in the rocks of the huge range of temperatures they had experienced over their life spans.  The program was led by Sean Beckett, Staff Naturalist at the North Branch Nature Center, and Alicia Daniel, Executive Director of the VMN, and, after a great introduction to some of the larger processes at work, we headed out to look at some ledges in Five Tree Hill Park. 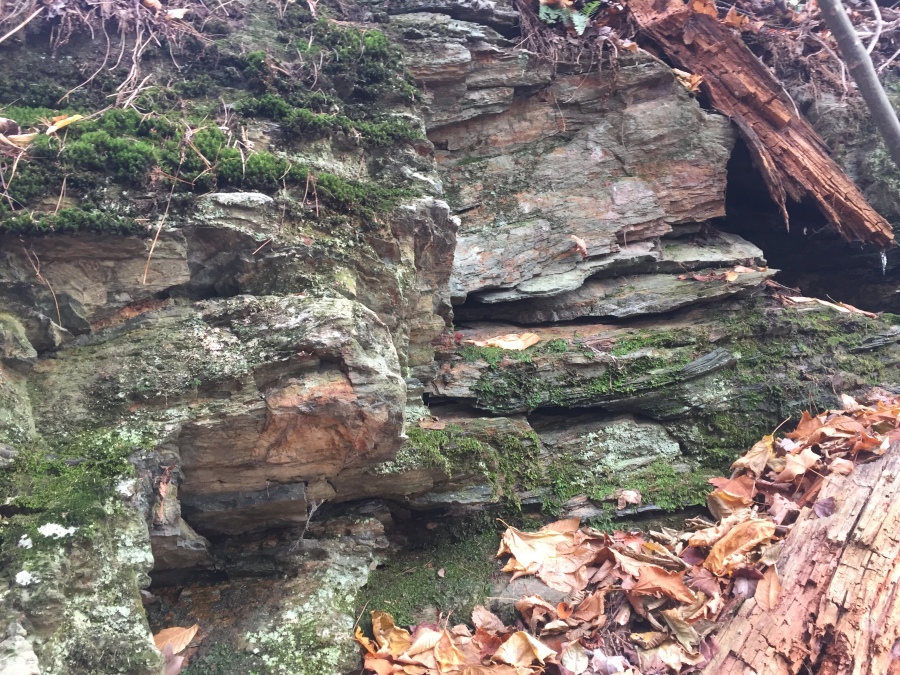 The rock ledge we found was a metamorphic phyllite: a gray rock with lots of mica sheets squeezed into layers, or foliations.  As I took off my gloves to pry some moss away from the rock to get a better look at it, I couldn’t help thinking about our introduction to how this rock was first formed.  The original sediments were clay-sized particles laid down in a very warm tropical ocean at the edge of our continent when we were at the equator.  As I fumbled with my cold fingers to get a photograph, I thought about the contrast in temperatures this rock has seen – from warm tropical ocean in its very first formation to today’s chilly Vermont temps.

But there was evidence of another chapter to the story, and it was a much warmer chapter than the tropical ocean’s had been.  The clay-sized particles in the tropical ocean eventually became shale rock, and many years later that rock was caught in the squeeze between the African and the North American tectonic plates as they were pushed together and collided, forming the Green Mountains.  The intense compression of that event heated the rock to very high temperatures, and changed the rock in ways that are still visible: the rock’s layered foliations.  As Sean was explaining the foliations, someone in the group found a piece of the ledge that had broken off and started to pass it around.  The rock had those same foliations, but those layers were also folded into u-shapes and s-shapes.  Sean made the analogy that during the very hot compression event, the rock would have been so hot that it would have acted like a warm chocolate bar, and been able to bend and fold.

By the time the rock got passed around to me, the whole story had been told.  As I held it in my bare hands, I ran my fingers along its warped foliations and noticed how heavy, dense, cold, and seemingly inert it was.  I paused for a moment to reflect on the contrast between its solid presence in my hands and its long complicated journey, from equatorial latitudes to halfway to the north pole, and from warm offshore ocean environments to hot continental compression to this quiet, cold corner of Vermont.  It was an amazing journey, and I found myself happy to be part of a group that was learning to decode the stages in the journey of this solid body of rock.

Find Me On Social Media